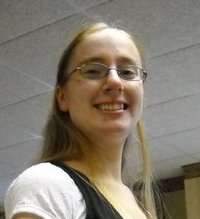 Jessica Jaster lives in Iowa with her husband and her (currently) one year old and two year old, as well as their cat, Pandora.

Jessica graduated from the University of Iowa with a degree in Anthropology.  Yes, she realizes that there is a big difference between Anthropology and writing young adult novels.  She actually tried for an English major (well actually, it was Criminal Justice, then English, then Anthropology), but the classes she had to take just did not fly with her.  Although, since Anthropology is pretty much just the study of humans and human culture, it could tie in with her novels in some way.

She has always had an over-active imagination and has been making stories up in her head for herself for as long as she can remember and finally decided to start writing them down (when she is not busy chasing the two little ones around anyway) and sharing them with anyone interested. Most ideas she has so far for her novels are for young adults - some fantasy, some science fiction and some normal contemporary story-lines.